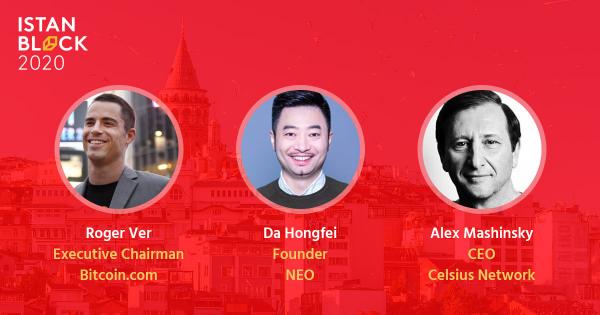 Istanbul Blockchain Week has just announced the speaker line up for its Istanblock 2020 event. The conference, which will take place in April, will feature several prominent figures in the crypto industry, including Roger Ver, Da Hongfei, and Alex Mashinsky.

While few would put Turkey on the list of places with a burgeoning blockchain scene, the country has been ramping up its efforts to get recognized as a leader in the new technology.

The country’s premier blockchain event, Istanbul Blockchain Week, will be taking place from 6-10 April and will see dozens of events taking place across Turkey’s largest city. One of the most highly-anticipated events will be the Istanblock 2020.

The organizers of the event have now announced the speaker lineup for the crypto-focused event, saying attendees can look forward to some big hitters from the world of blockchain and crypto taking to the stage.

Roger Ver, a Bitcoin Cash evangelist and executive chairman of Bitcoin.com will be spearheading the event, the organizers said, adding that he will be joined by other “thought leaders and luminaries” from the industry.

Cryptocurrency exchanges will also be one of the topics discussed at the event, as Ben Zhou, the CEO and founder of Bybit has been announced as one of the speakers.

However, the event will also feature some big names that don’t come from crypto. According to the announcement, DP Suresh, the vice president of engineering at Yahoo, will be among the event’s speakers.

Erhan Korhaliller, Founder and CEO of crypto PR agency EAK Digital which organized the event, said that the goal of Istanbul Blockchain Week was to promote Turkish blockchain projects globally. He said in the announcement:

“Already, so many people in Turkey are familiar with crypto. What this event will do is catapult that enthusiasm and energy onto the world stage. It’s going to be exciting.”

The Istanbul Blockchain Week will take place from April 6-10, while its crowning event, Istanblock 2020, will be held on April 9-10.

Disclosure: CryptoSlate is a media partner for Istanbul Blockchain Week.

Turkey’s most exclusive blockchain event — IstanBlock 2020 — launches its early bird ticket sale today, amid huge excitement across the region for the first speaker announcement, expected in the coming weeks.

Turkey’s financial regulator is ramping up efforts to develop a new framework that allows the federal government to oversee the use of cryptocurrencies throughout the nation.