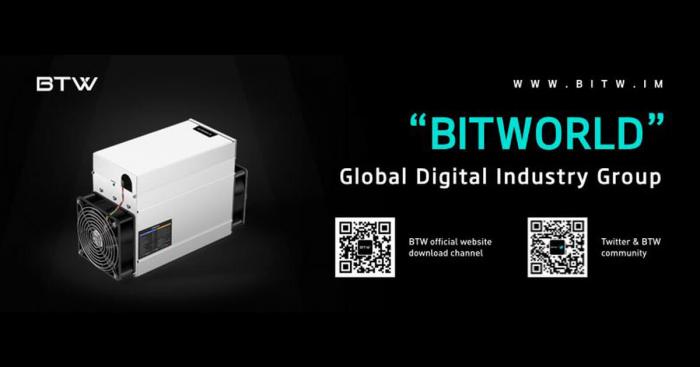 Under the triple wave of DEFI, Bitcoin halving and the upcoming FIlecoin mainnet, ETH, BTC, and Filecoin mining have been pushed back to the top of the blockchain hot list. According to data from CoinMarketcap.io, during 2018 alone, the value of mining rewards received by Bitcoin miners reached $5.5 billion.

It is reported that the UAE cryptocurrency giant GDIG (Global Digital Industry Group) has gradually fully invested in the global mining industry, and has established a mining subsidiary “BITWORLD”, promising to gradually invest US$50 million in BITWORLD by 2021. In addition, it is also deploying BTC and ETH mining industries in the power industry and power equipment industry, as well as launching a Cloud Mining Service platform in the Middle East, Asia-Pacific region, and policy-stable areas.

At the same time, BTW Network has independently developed a professional high-performance BITW series of mining machines, and through revolutionary circuit architecture adjustments, the energy efficiency ratio is pushed to the best. BTW’s exclusive series of mining machine BITWROLD-90T, equipped with a new generation of customized chips from Bitmain, has an energy efficiency ratio as low as 23J/TH.

BITWORLD’s layout in the mining field is at the forefront. Zhang Zheng, an investor in China’s SICHUAN mine and the head of Shenzhen Turing Blockchain, said, “We are ready to conduct in-depth binding cooperation with BITWORLD in cloud computing power and other businesses. The cost for our computing power is relatively low, so through using BITWORLD’s market channels, we can achieve a mutual success”.

According to reports from major market personnel, the UAE royal family is about to invest 20 million US dollars in the construction of the BTW mine. Relying on the advantages of good energy, power equipment, mining equipment, and policy stability in the Asia-Pacific region, the mining of BTC and ETH will begin. Meanwhile, the computing power will be provided to serve the BTW network. BTW will launch a self-developed chip 90T mining machine to support the mining of BTC and BTW. The first batch of high-performance mining machines will be issued 3000 units. More than 1000 units have been ordered by institutions and communities.

In the world’s blockchain wave, the mining industry plays an important role. This time, the BTW Foundation coordinated and provided a management framework for the network and asset reserves, and took the lead in funding that can have social impact. It aims to provide as many dimensional support as possible for the development of the global inclusive financial industry, and collaborate with various institutions to promote the growth of blockchain mining!