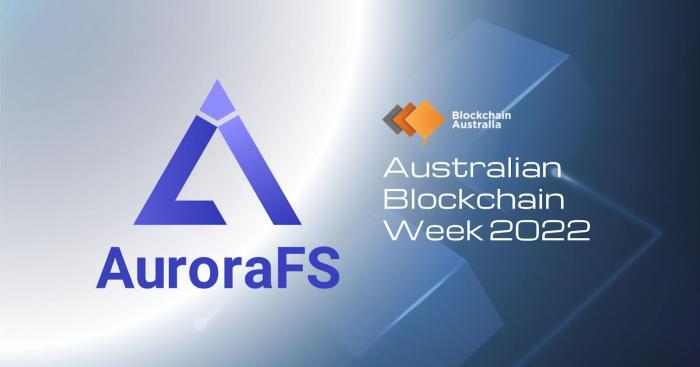 Gauss Aurora Lab, the innovative blockchain developers helping to create the AuroraFS decentralized cloud storage blockchain network, will be in attendance at Australian Blockchain Week 2022 on March 24. Not long after, AuroraFS is set to launch its decentralized content platform – known as Web3Tube – in line with its Phase III token airdrop and contest commencing March 25.

AuroraFS looks to stand out at Australian Blockchain Week 2022

The team from Gauss Aurora Lab will be exhibiting during Australian Blockchain Week 2022, in which they will look to share information and insight about the unique blockchain project which has potentially major implications for decentralized data streaming and storage applications on a commercial scale. March 24 will see the Gauss Aurora Lab exhibit Aurora Filesystem live at the event.

Experienced blockchain leader, professor, and AuroraFS official advisor, Warwick Powell will also be running an in-depth workshop with the Health Sector special interest group of the Asset Institute. The work of the Asset Institute is centered around developing new approaches to define and achieve best-practice economic, environmental, and social performance to solve complex infrastructure and asset management difficulties. AuroraFS is also recognized as the key industry sponsor for the Metaverse and Blockchain Forum and Workshop on the Gold Coast, during which the decentralized project will be launched locally.

Australian Blockchain Week 2022 is anticipated to draw in thousands from inside and outside of Australia’s borders, being heralded as ‘the biggest blockchain event the country has ever seen’. This is not hard to believe in the least, as Australia has seen significant development in the blockchain industry over the last 12 months. AuroraFS will look to build on the momentum and continued growth and adoption of blockchain technology that has taken place across the nation. The expansion of blockchain adoption amongst Australian citizens and residents is there for all to see, with 20% of Australians now claiming to own cryptocurrencies, with this number rising daily.

It is different in DeFi, than is the case with most other industries and professional communities, in that development within the blockchain industry is not particularly seen as competition, but more or less a level of cooperative effort shared between innovators helping to bring light, increased relevance and market share to the decentralized markets. Gauss Aurora Lab professionals are a good example of this, being a cohesive group of highly skilled experts who joined together and worked to develop a unified vision and decentralized product by cohesively employing independently cultivated skill sets and areas of technical proficiency.

The Gauss Aurora Lab experts have come together to successfully develop and launch a peer-to-peer decentralized content network. A web 3.0 protocol stack is what makes up the fully decentralized cloud data system, powered by bandwidth rewards. Users get crypto, in the form of AUFS tokens, in exchange for devoting broadband devices with bandwidth computing power to AuroraFS. Once Aurora FS is launched, the Gauss Aurora Lab involvement with the facilitation of the network will cease, allowing the platform and blockchain to be truly decentralized.

Over 200 industry professionals will converge on Australian Blockchain Week 2022 to deliver discussion, ideas, and dialogue around dozens of blockchain-related topics and concepts over the course of the 5-day event. Attendees are booked and confirmed from over 25 different countries around the world, as this event is shaping up and being talked about as the biggest to ever be held in Australia.

Other news and next steps for AuroraFS

AuroraFS is preparing to release the live version of Web3Tube in just a few days. Web3Tube is the decentralized content streaming platform which allows users to set up profiles and upload videos, for sharing, liking, and commenting in a fully decentralized YouTube-like platform, built-in Web 3.0. Individuals will be given the opportunity to participate in the AuroraFS Web3Tube platform and also non-staking broadband mining for rewards.

In total, there will be several rounds conducted across three different activities; most likes, most subscribers, and most broadband dedicated to the AuroraFS platform. The total amount of AUFS tokens to be rewarded over the course of the contests are 50,000 to what is set out to be thousands of winners.

The Aurora Filesystem has a big few weeks ahead with Australian Blockchain week, Web3Tube, and Phase III airdrop all coming to fruition inside a fortnight. A refreshed website and whitepaper are also in upcoming plans with implementation and publishing anticipated soon. As AuroraFS continues to develop momentum towards its token release, news and all updated information can be seen on social media and Telegram channels listed below.

Join us on Telegram