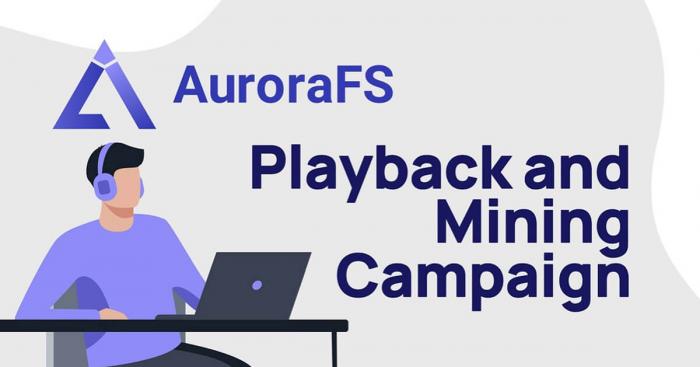 AuroraFS decentralized P2P cloud storage and distribution network is currently hosting multiple campaigns which highlight the function and capabilities of the independent blockchain. The unique campaigns accomplish this through two specific aspects which are connected to specific AuroraFS network functions. One exists directly on the AuroraFS network itself, while the other comes in the form of a unique development which demonstrates broadband and HD quality playback capability enabled by the decentralized network – Web3Tube.

Web3Tube is a decentralized video storage and streaming network which uses AuroraFS blockchain as the basis of its operation and function. The Web3Tube campaign is centered around viewership on the network, while the other campaign focuses on the AuroraFS network directly, and rewards 200 users for non-staking broadband mining.

The AuroraFS non-staking broadband mining competition gives the top 200 broadband miners on the AuroraFS network rewards for their part in providing bandwidth via broadband devices which meet tech and storage requirements. Cheques express the amount of bandwidth dedicated by each unique device dedicated to the network by individual owners. This is important to understand since winners are rewarded according to this metric – cheques. The more bandwidth provided, the more cheques are attributed to the individual miner.

The sixth round of the non-staking mining campaign is scheduled to run until May 27th, with winners being announced and scheduled for AUFS token airdrop thereafter. 1 AUFS token is rewarded for every 5,000 cheques accumulated by the final top 200 miners. Users are able to download the latest version of AuroraFS to enter the mining competition. Device and other relevant requirements are described on the unique download page.

The video playback campaign will reward the top 500 viewers on the Web3Tube decentralized video platform. A metric referred to as flow energy reflects the amount of video watch time attributed to individual nodes on the decentralized video storage and streaming platform. The third round of the video playback campaign is underway and set to run until May 27th. The maximum number of AUFS airdropped tokens that will be rewarded to any individual winner has been set to 15.

Token allocations set for flow energy were raised in a recent change. Now more AUFS tokens will be rewarded to each of the top 500 contest winners. The original end date of May 13th was extended by 2 weeks because of recent issues with the Binance Chain network. Anyone is still able to download Web3Tube to join and interact on the video content network and watch to earn future airdropped AUFS tokens. Features and function of Web3Tube makes it closely comparable as a decentralized alternative, to popular centralized options like YouTube and Vimeo.

Other AuroraFS News and Updates

In other news the Gauss Aurora Lab team, contributors to the AuroraFS decentralized blockchain network, have been named as exhibitors and presenters at the FinTech21 event dedicated to blockchain, crypto and tech innovations. FinTech21 is expected to draw at least 2,000 attendees, with over 60 speakers confirmed to date. The two-day conference will take place on May 18-19 in Melbourne, Australia.

As the time draws nearer to FinTech21, in honor of the upcoming appearance, AuroraFS launched a Gleam Giveaway. The Gleam contest will reward best selected videos and reward the top 3 video creators with $200, $100 and $50. 50 additional video creators will be rewarded with $10 each randomly as part of the contest giveaway as well. All prizes will be paid in popular BSC stablecoin – BUSD. All contests and other news is kept up to date on AuroraFS social media channels and most frequently on the community Telegram channel.