PayPal to allow Americans to pay with Bitcoin, Ethereum at over 29 million vendors 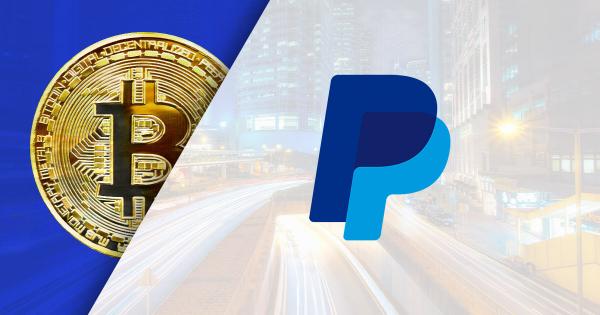 PayPal announced today that it shall allow US customers to pay with cryptocurrencies throughout its worldwide retailer network, as per a report this morning on Reuters. The company will charge no transaction fee to checkout with crypto and only one type of coin can be used for each purchase, it said.

The service—which is yet to be formally announced later today—comes months after PayPal announced it was developing and launching a crypto business. It will be available to all of its 29 million merchants in the coming months.

PayPal Holdings will announce later on Tuesday that it has started allowing U.S. consumers to use their cryptocurrency holdings to pay at millions of its online merchants globally, a move that could significantly boost use of digital assets in everyday commerce.$PYPL

Bringing crypto to all

As per the report, customers holding Bitcoin, Ethereum, Bitcoin Cash, and Litecoin in their PayPal digital wallets will now be able to convert their holdings into fiat currencies at checkouts to make purchases.

This means customers would pay in crypto, as usual, and PayPal shall instantaneously convert the holdings into fiat currency to pay the vendor. For the vendor, this would mimic the current payment experience, while to the PayPal user, this would be a newer experience of having spent their cryptocurrency to purchase goods or services.

“This is the first time you can seamlessly use cryptocurrencies in the same way as a credit card or a debit card inside your PayPal wallet,” said Dan Schulman, the President and CEO of PayPal.

The so-termed ‘Checkout with Crypto’ feature builds on the ability for PayPal users to buy, sell and hold cryptocurrencies. The move now makes PayPal one of the biggest financial companies to facilitate cryptocurrency payments even as the sector remains in a legal grey area globally.

To protect vendors and customers against the infamous volatility of cryptocurrencies (no one wants to pay a certain amount and receive a settlement in a different amount), PayPal said it would settle all transactions in fiat currency, meaning merchants will not take on the volatility risk.

“We think it is a transitional point where cryptocurrencies move from being predominantly an asset class that you buy, hold and or sell to now becoming a legitimate funding source to make transactions in the real world at millions of merchants,” explained Schulman.

The move can help bolster the daily usage and adoption of cryptocurrencies like Bitcoin and Ethereum among millions of its online merchants globally—bringing in the much-needed visibility and broader proof-of-concept to the relatively niche sector.

Meanwhile, the PayPal development comes on the back of Visa announcing yesterday that it would settle USDC transactions directly on the Ethereum network, in the first such move of an institution directly engaging with a public blockchain network.

On September 18, Visa, Mastercard and three major banks paid $6.2 billion in an antitrust settlement for forcing merchants to pay swipe fees and preventing them from utilizing other methods of payment.