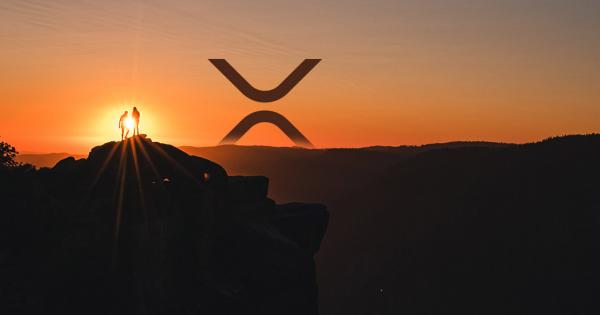 XRP recently reached price levels that have not been seen since 2017. After plunging over 35 percent in less than a week, this cryptocurrency hit a low of $0.21 on Sept. 24.

Meanwhile, its BTC pair traded at its lowest point on Sept. 6 at 2,365 satoshis. According to 40-years trading veteran Peter Brandt, the swing low provided “some evidence” that XRP is bottoming against Bitcoin.

Brandt noticed on Oct. 4 that an ascending triangle formed on XRP/BTC 1-day chart. This is considered a bullish pattern that estimates an 18 percent upswing (determined by the height of the triangle) that could take XRP to 3,700 satoshis. Thus far, this crypto surged approximately 12 percent from the breakout point of the ascending triangle, 3,100 satoshis, to reach a high of 3,500.

Along the same lines, Luke Martin, host of the Coinist Podcast, distinguished a rounded bottom developing under this time frame. As XRP began reaching higher highs, Martin said that 4,000 satoshis could be a potential take profit point for investors before XRP continues its uptrend.

However, when looking at higher time frames other analysts believe that XRP is bound for an exponential upswing.

@GalaxyBTC, for instance, evaluated the moving average convergence divergence (MACD) on XRP/BTC 1-week chart, which is commonly used to follow the path of a trend and calculate its momentum. The popular trader on Twitter found that since its inception XRP has had three bullish MACD crossovers.

Now, the MACD could be forecasting another significant price movement since it recently had a bullish crossover on the week of Sept. 9. If history repeats itself, XRP could surge up to around 7,000-117,000 satoshis.

Taking into consideration the concept of fractals, which proposes that patterns are made up of smaller, self-contained patterns, Eric Thies thinks XRP has a strong chance of going up from current price levels. Since this cryptocurrency is down nearly 80 percent from the high of 11,465 satoshis on Sept. 21, 2018, it could soon start a new uptrend as significant as the previous ones.

Despite the recent report by the Crypto Rating Council that concluded that XRP has a high probability of being classified as a security by the U.S. Securities and Exchange Commission, its BTC trading pair seems bullish. At first hand, this cryptocurrency is signaling a move to around 4,000 satoshis, but when deeply scrutinized the upswing could be more significant.

If the outlook presented by the MACD on the 1-week chart is correct, XRP could be preparing for a 180 to 4,700 percent price increase. Therefore, the 100-week moving average could be used as an indicator to confirm this scenario. If XRP moves below it a further correction could be expected, invalidating the bullish views previously analyzed.

Eric Thies is a crypto and traditional market analyst, well known in the crypto space for his contributions and in-depth content on Twitter (@KingThies). Learn More