Justin Sun, the founder of TRON, invited United States President Donald Trump to join him and several other crypto executives on a private lunch with Warren Buffett. 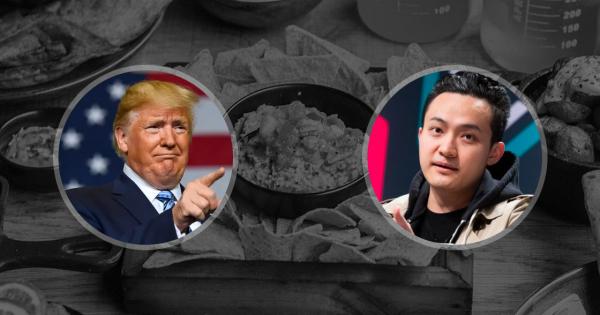 Justin Sun, the founder of TRON, invited U.S. President Donald Trump to join him and several other crypto executives on a private lunch with Warren Buffett. Tron famously paid $4.6 million for the charity lunch with the Berkshire Hathaway CEO but postponed it in July due to alleged health concerns.

Warren Buffett’s charity lunches have been around for 20 years, but few have managed to stir as much controversy and attract as much media attention as this year’s event. The lunch, which was auctioned off for $4.6 million back in June, is yet to happen but is already regarded as one of the most notorious events in crypto this year.

Justin Sun, the 28-year old founder and CEO of Tron, paid the astronomical price for the chance to sit down with the legendary Berkshire Hathaway investor, a vocal critics of cryptocurrencies.

Sun wanted to use the opportunity to change Buffett’s stance on Bitcoin, saying that he was a “long-term believer” of Buffett and his value investing strategy. Previously, the billionaire investor famously called Bitcoin “rat poison,” and a “delusion.”

However, Sun postponed the lunch back in July saying his health prevented him from attending the event in San Francisco. The move sparked even more controversy, as many suspected the Chinese government had something to do with it.

Will Donald Trump join Buffett and Sun in discussing the future of crypto?

Seen as a unique opportunity to bring traditional finance closer to crypto, Sun’s lunch with Buffett was set to host some of the most influential people in crypto. One of the first to confirm his attendance was Jeremy Allaire, CEO of Goldman Sachs-backed Circle.

Yoni Assia, the founder and CEO of crypto trading platform eToro said he would be honored to join Sun and Buffett, confirming his presence in a tweet. Huobi’s Livio Weng also accepted an invitation to join the two in San Francisco, as did Charlie Lee, the founder of Litecoin.

Changpeng Zhao, the CEO of Binance, said he would be unable to attend, but Helen Haiyu, the head of blockchain at the Binance Charity Foundation, will be taking his place.

Sun unofficially invited other industry heavyweights, including Ethereum co-founder Vitalik Buterin, with most of them confirming that they wouldn’t be attending the event.

However, Sun is still waiting for one person to RSVP—U.S. President Donald Trump.

Sun extended the invitation to President Trump when the latter shared his unfavorable thoughts on Bitcoin and other cryptocurrencies. Sun said that Bitcoin and blockchain technology are “the best chance” for the U.S. and, using Trump’s own rhetoric, said that he was being misled by fake news.

While few expect Trump to accept the invitation and attend the lunch, there is a chance that he acknowledges the invitation extended to him. Even declining to join the two would prove to be monumental, showing that the word about crypto can travel as far as the White House.

However, given the drama surrounding the lunch, it might be better that President Donald Trump was never part of the debacle.